Consistent product communication across all touchpoints of the Customer Journey. Main character: the digital twin.

Following the classically produced introductory campaign, a visually corresponding moving image for multiple touchpoints of the Customer Journey was to be created. The media required included a product film for online and showroom communication as well as numerous banners, teasers and ads for use in online media. The visual guidelines were the photo worlds developed for the launch campaign. 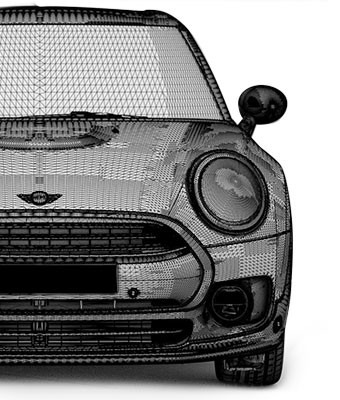 Based on the available photo material of the campaign, the location was digitally recreated on the computer: a studio in an old industrial hall. In the next step, the digital twin of the vehicle was placed and perfectly illuminated. The result was a digital copy of the location and the vehicle from the real shooting of the campaign. In this setting, as in a real film, the product was staged on film.

Close-up shots showed the special design and product features of the MINI Clubman to the viewer. The film opened with a slow sequence and increases the tension until the climax: the MINI Clubman rolls out of its garage and enters its urban home. Specially composed and tailored, the sound tells the story of the images at a new level and underlines their message.

Realistic – Dynamic – Award-winning! A digital twin of an entire location, including vehicle, means freedom. Not only did it make it possible to create a product film, banners and ads in various formats could also be made in a time- and cost-efficient manner. Since the digital twin of the vehicle receives every possible equipment variant, it was even possible to make country-specific adjustments to the MINI in the ads. Homogeneous communication, individually adapted to different markets. This production method convinces not only MINI, but also the jury of the Automotive Brand Award, for example.