With 32,000 m² of projection space, the Tuwaiq Escarpment is transformed into one of the world’s largest projection mapping installations.

The Dakar Rally is one of motorsport’s most enduring fixtures. In 2020, this marathon rally was held in Saudi Arabia for the first time in its 42-year history. After twelve challenging stages, the final event was held southwest of Riyadh against the backdrop of the iconic Tuwaiq Escarpment. Alongside concerts and fireworks, the escarpment itself was to be turned into a projection screen for one of the world’s largest-ever projection mapping installations. 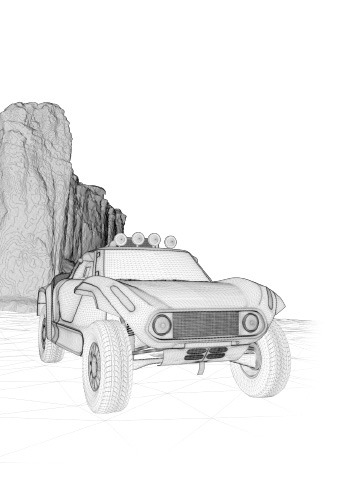 A high-precision 3D scan of the mountain range plus cutting-edge CGI rendering systems were used to create the technical building blocks for the audiovisual show produced by Peter Göltenboth: a high-speed race that acts as a metaphor for the evolution of human mobility. A total of 84 high-end projectors plus the ingenious integration of onstage screens means that the race takes place on, in and even in front of the mountains. Peter Göltenboth: “You rarely get the chance to produce a really big, multidimensional show like this. And without the expertise, technology and dedicated artists at Effekt-Etage, this would have been impossible in the short space of time available. Of course, we ran simulations of the show in VR during production – but experiencing this kind of setup live is something that’s on a completely different level.” Tewe Pannier Principal Partner GTV adds “This was one of the most challenging projects GTV produced and it couldn’t have been done without Effekt-Etage. Their flexibility, performance and reliability are unmatched.”

A double world-first: the first Dakar in Saudi Arabia and one of the world’s biggest-ever projection mapping installations. A 32,000 m² screen ensured plenty of goosebumps among tens of thousands of spectators attending and countless shares on social media.