A social VR brand experience where up to three people become part of a digital world and co-create a new form of artwork.

The task was to create a state-of-the-art Virtual Reality brand experience for the visitors of the Mobile World Congress 2019 in Barcelona, the largest mobile event in the world. 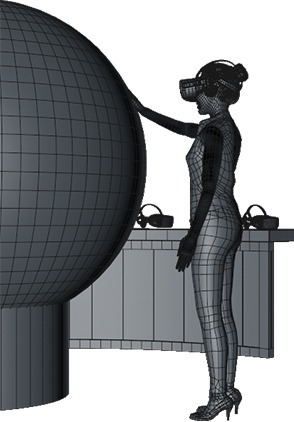 An integral part of the user experience involved a specially designed wireless Virtual Reality setup. Despite diving into a virtual world with the VR headset, this setup allowed up to three people complete freedom of movement at the same time. Furthermore, through the fusion of the real and the virtual, new interaction possibilities were created for users. They could not only see each other, but also interact with and feel their immediate environment. Important factors for breaking down the boundaries between the real and digital worlds were the virtual projections of the users’ hands as well as the physical elements of the exhibit – such as the 1.8m spheres, which served as the user interface for the collaborative creation of a digital artwork. Additionally, a relaxed and undisturbed VR-experience was made possible by a harmoniously separated interaction area of the exhibit.

But the user experience did not end by taking off the VR headset. In order to demonstrate the integration possibilities of the latest technologies, the trade fair experience was complemented by a digital give-away. Fully automated, the visitors received their jointly created artwork in augmented reality as well as a stylishly staged ready-to-share 2D image via email – directly on their mobile device – and shareable via social media.

The result is an immersive social virtual reality brand experience. For the first time, multiple users were immersed in a digital world without being restricted in their freedom of movement by cables. In both worlds, the newly born artists were able to physically touch elements of digital reality and co-create a new form of artwork. By extending the UX with the Augmented Reality feature, users were able to enjoy their jointly created artwork beyond the scope of the fair and share it with their friends.